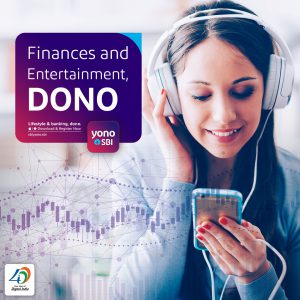 UPI mobile payments through mobile apps has been one of the biggest contributors to retail digital transactions in India. The pay mode now accounts for around half the retail digital transactions in volume terms, while its value share is around 10% (due to relatively small average per transaction value compared to NEFT/IMPS). UPI’s market share gains have mainly come at the expense of other traditional digital pay-modes such as NEFT, Credit cards and PPIs (pre-paid instruments like mobile wallets). Some contributing factors to the success of UPI have been Demonetization, mobile-first approach, instant bank-bank fund transfers, subsidy on transaction costs, growing penetration of mobile phones as well as Internet connectivity and early adoption by a host of fintech start-ups.

UPI pay mode now accounts for around half the retail digital transactions in volume terms, while its value share is around 10% (due to comparatively small average per transaction value compared to NEFT/IMPS). Third-party apps such as Google Pay and PhonePe together presently handle around 80-85% of the total UPI transactions in the country. The launch and growing acceptance of UPI has changed the retail payments business considerably. 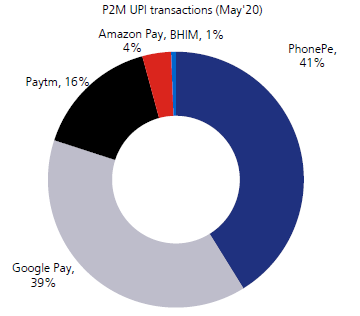 Credit Cards Vs Debit Card Usage in India – 2020
The acceptance of cards (especially debit cards) as a pay-mode for P2M (Person to Merchant) payments is increasing in India. Today around half of the total card transaction usage is for P2M payments compared to just around 17% five years back. However, credit cards account for a disproportionately high share in total card-based P2M transactions (in both value and volume terms) despite the fact that they account for only around 7% of the total cards issued. This is mainly because the average frequency of usage of credit cards for P2M transactions is more than 6x of debit cards. Further, backed by the government’s digital push, RuPay cards (debit card) have seen a significant rise in use across India. They now account for a fourth card-based payment volumes and around a seventh-of the total transaction value share.

PPI (pre-paid instruments like mobile wallets) which were once expected to scale up rapidly in the retail digital payments industry have clearly not achieved the success that they were expected to achieve. While there could be several explanations for this, one of the main reasons we believe is due to strong competition from UPI. However, till date the RBI has not yet been able to completely secure the UPI Payments System as there are frauds operating on Google Pay and other OTT Payment Apps who go untraced and unnoticed by the Indian authorities. The Eco-system definitely needs strengthening but will the current RBI governor listen ?