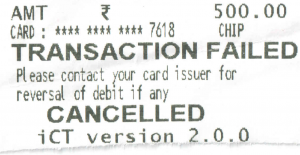 India is a truly Unique Country in its own way. At one end it boasts of having the Second Largest Telecom Subscriber Network and on the other hand Credit Card transactions happening on these Telecommunications network fail quite often for connectivity reasons. Such an instance happened when the Credit Card Authorization was Cancelled / Failed as shown in the receipt to your left. However, the customer has received a SMS on Mobile message that Rs 500 transaction has happened with the outstanding balance indicated. The merchant will then demand you pay in Cash or Re-Do the Credit Card transaction on the PoS terminal. As a Customer what are my Rights in such situations to avoid billing twice ?

According to the Banking Rules, if a Credit Card Transaction is Cancelled, then it will not be recorded in the Merchant’s PoS terminal where a daily ledger is kept for him to settle with the bank at the end of the day. So You demand a Copy of the Batch Summary / Detail Report that can be generated as shown below.

How do I know If my Card Transaction is in the Batch Summary or Not ?
You can see in the Transaction Failed Picture that the Last 4 Digits of the Card are 7618 and further it indicates its a CHIP card. Now since the Transaction has been cancelled by the Bank for reasons better known to them, this CARD Number is Not indicated in the Batch Summary. You won’t see Card ending with 7618. Thus this confirms the transaction has actually failed and cancelled. Alternatively, you may also receive a SMS message from the bank stating the card transaction has been CANCELLED in which case you need not demand for the Batch Report. Preserve all the communication received from the bank and merchant terminal until you received your credit card statement and verify if everything is in order.

Should you have any further questions or unexplained situations, immediately call the Bank’s Credit Card Helpline and resolve the matter. Also let us know if your situation is any different from this so that other readers can also be enlightened on the same. [e-mail it to feedback @ CardBhai Dot com]